This site uses research and analytics cookies that help us understand user behavior. To learn more about how we use and protect your data, please see our Privacy Policy. Accept Refuse

The origin of the name OverDrive

I often get asked where the name OverDrive came from. There are several parts to the story, starting with my love of cars.

Our earliest logos for the company were a Hurst Shifter from the muscle cars of the 1970s: Corvette, Camaro SS, Mustang, or the Pontiac GTO. I also spent three years organizing and operating the Around the World Auto Race, which was an international auto rally to celebrate the U.S. Bicentennial, but let’s save that story for later.

The origin of the company name comes from an urgent need to rebrand our young software company in the 1980s. At the time, we were called TurboSoft; turbo being another auto reference.

One day, I received a letter from one of the nation’s premier law firms alerting me that our use of the word TurboSoft was infringing on the trademarks and other intellectual property of a company called Borland. Still in our early days, I was determined not to fight because, as The Art of War taught me, I had a very powerful and wealthy opponent. I was distraught, sitting in a leased car I took over payments for when we lost a sale executive. I determined that I needed to quickly settle the lawsuit from Borland, which was founded and headed up by the brilliant mathematician, inventor, and entrepreneur Phillipe Kahn.

Kahn was one of the most successful early software entrepreneurs, following Bill Gates, Larry Ellison, and the Apple team. His company Borland offered utilities like the Sidekick personal information manager, but also had a large line of software programming languages using the Turbo brand (Turbo Basic, Turbo C, etc.).

At the time, our new software product was a word processing “add-on.” During the early 1980s, long before Windows, there were few apps that permit any form of multi-tasking software. We developed for the DOS programs that would load into a PC’s memory and “pop up” or load into memory as a TSR (terminate and stay resident) program. 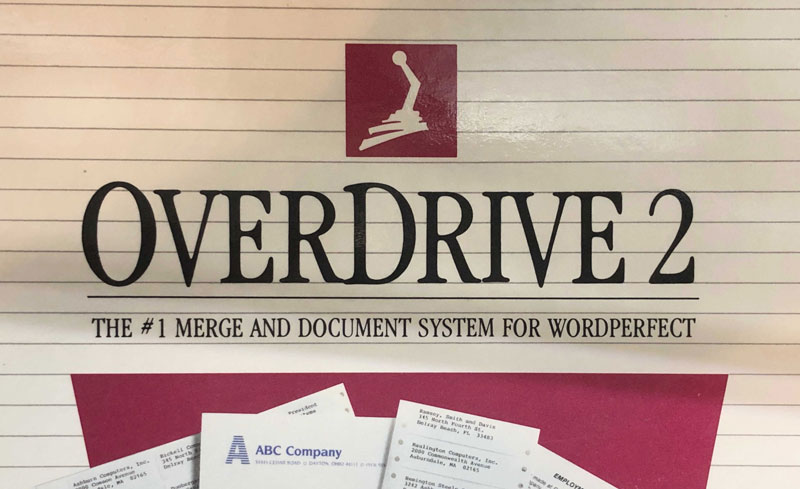 At the time, WordPerfect was the dominating PC word processor. Our software would use word processing templates and forms and an early form of artificial intelligence to automatically assemble multiple forms and documents simultaneously. I had applied and received an early software patent for a Multiple Integrated Document Assembly program, which I called MIDAS.

We were offering a user a way to get to results faster and more efficiently.

Sitting in the driver’s seat of my leased Nissan Maxima I looked down and saw on the side of the vertical gear shifter a small button marked “Overdrive.”

Shifting into overdrive is a common routine to put your car’s engine into the highest gear. Overdrive lets you get there faster and more efficiently.

I hoped this name was available for our software product and company. It was, and we quickly adopted the name for both the product and renamed the company. We became initially OverDrive Systems, Inc., which was eventually shortened to OverDrive, Inc.

This idea of going faster and more efficiently has been a cornerstone of our culture and product roadmap. The name OverDrive.com and all that followed goes back to my passion for cars.